Warning: Parameter 2 to _filter_fw_ext_sidebars_title_like_posts_where() expected to be a reference, value given in /home/customer/www/karaltagp.com.au/public_html/wp-includes/class-wp-hook.php on line 287

Warning: Parameter 2 to _filter_fw_ext_sidebars_title_like_posts_where() expected to be a reference, value given in /home/customer/www/karaltagp.com.au/public_html/wp-includes/class-wp-hook.php on line 287
 Measles alert for the Central Coast and plane passengers - Karalta General Practice

Measles alert for the Central Coast and plane passengers 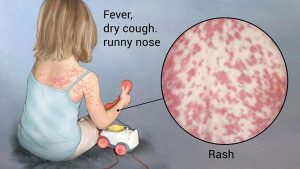 Vaccination is free for anyone born during or after 1966 who hasn’t already had two doses. If you’re unsure whether you’ve had two doses, it’s quite safe to have another.

For more information or to check your immunisation status, please make an appointment with your GP or one of our Practice Nurses.

NSW Health is alerting Central Coast residents and people on a 25 May flight from the Philippines to Sydney to be aware of measles symptoms after an infant on the flight was diagnosed with the disease.

The infant, who is under 12 months of age, was infectious while on Cebu Pacific flight 5J 41 – which arrived from Manila at Sydney International Airport at 09:50am – and developed a measles rash a few days after.While the risk of infection is low in fully-vaccinated people, anyone on this flight and at Sydney International Airport around the arrival time, including at baggage carousels and in customs areas, are advised to watch for symptoms over the next two weeks, as it can take up to 18 days for symptoms to appear following exposure to a person with measles.